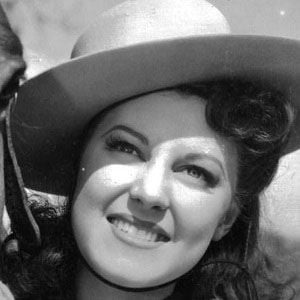 Most well known for her performances in the 1940s Gene Autry films Down Mexico Way, Sierra Sue, Cowboy Serenade, Heart of the Rio Grande, and Home in Wyomin.' She is also notable for her supporting role in the 1968 Peter Sellers film The Party.

She appeared in her first film, Station Content (1918), when she was less than three months old and went on to make childhood appearances in several other silent movies.

During the World War II years, she traveled to combat areas and performed for Allied troops.

The daughter of actors Robert and Eva McKenzie, she spent her youth in Hollywood, California. Following a brief marriage to actor Steve Cochran from 1946 until 1948, she was married to screenwriter Tom Waldman from 1948 until 1985. She and Waldman raised children named Tom and Madora together.

She performed with Bert Lahr (who is most well known for his portrayal of the Cowardly Lion in the classic film The Wizard of Oz) in a Broadway production of Burlesque.

Fay McKenzie Is A Member Of