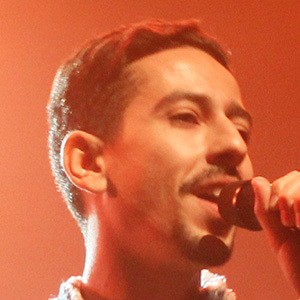 Moroccan actor and singer who is best known for his hit single "Werda ala Werda" which was featured in the 2006 film Bitter Orange. He is also known for his feature film roles including in Majid and Anger.

His career as an actor first started in theater after attending the Higher Institute of Dramatic Arts and Cultural Animation in Rabat. He then formed the music group K'lma in 2004. His feature film debut came in 2010 when he starred in Majid of Nassim Abassi.

He is known for having won the Electro Dance Category Trophy in May of 2015 at the Morocco Music Awards for his song "Hak A Mama".

He was born and raised in Tetouan, Morocco.

He starred alongside Stéphane De Groodt in the French television series Kabul Kitchen.

Faycal Azizi Is A Member Of