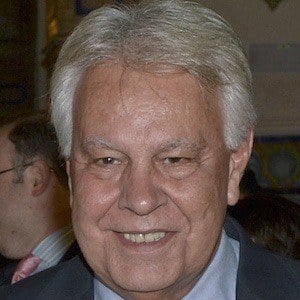 Spanish social-democratic politician who became the longest-serving Spanish prime minster after serving four successive mandates from 1982 to 1996. He was also the General Secretary of the Spanish Socialist Workers' Party for 23 years.

He studied Law at Seville University and began a career as an attorney.

His rise to power is often considered the final step in the reinstatement of democracy following the death of former military dictator Francisco Franco.

He married María del Carmen Julia Romero y López in 1969 and they have three children.

He and José María Aznar both served as Prime Minister of Spain.

Felipe González Is A Member Of