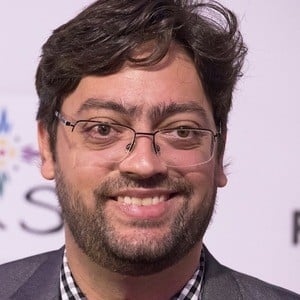 His debut in television began in 2000 on the series Workout. He earned more recognition in 2003 when he starred as Carlos in Xuxa in the World of Imagination. His debut in film came in 2006 when he appeared as Henrique D'Avila in Irma Vap-The Return.

In addition to acting, he is also known for hosting and appearing in several different podcast series including World's Best Podcast and Podcrastinators.

He was born and raised in Rio de Janeiro, Brazil. He is the son of cartoonist Chico Caruso. He married Mariana Cabral in 2014.

He voice dubbed for the character of Trojan Horse in The Emoji Movie which was originally played by fellow voice actor Conrad Vernon.

Fernando Caruso Is A Member Of