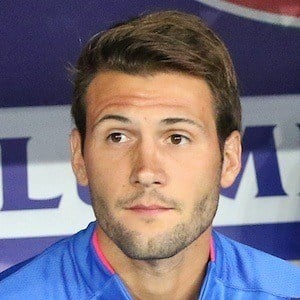 Professional football player who is best known with his association with the Spanish club Sevilla. He is often seen playing as an attacking midfielder.

He first began playing his youth career for the team Barrio Parque in 2003. He later moved on to Belgrano in 2005 and in 2007 he began his senior career for the same club. In 2015 he made his debut appearance for the Italian national team.

With a father from Italy and a mother from Argentina, he is known for holding dual citizenship.

As a member of the Italian national team he plays alongside Gianluigi Buffon and Ciro Immobile.

Franco Vazquez Is A Member Of