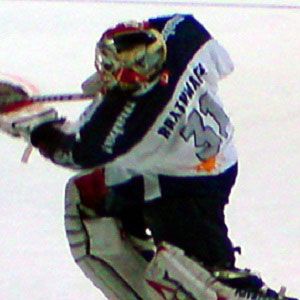 Canadian hockey player best known to NHL fans as a goaltender for teams like the Calgary Flames and St. Louis Blues. He also played overseas for Adler Mannheim, where he was named Most Valuable Player of the German Hockey League in 2009.

He was born in Ottawa and played junior hockey with the Orillia Travelways.

He appeared the music video for 'Welcome to Atlanta' by rapper Jermaine Dupri in 2002.

His parents moved from Barbados to Canada in the mid-60's.

He was teammates with fellow goaltender Mike Vernon as a member of the Calgary Flames.

Fred Brathwaite Is A Member Of