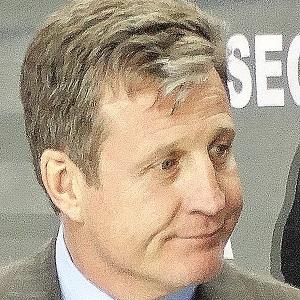 Former goaltender who spent most of his career with the Calgary Flames. One-time winner of the William M. Jennings Trophy and Conn Smythe Trophy.

He won a World Junior Championship bronze medal for Canada in 1983.

He was named to four consecutive NHL All Star games from 1988 to 1991 and won a pair of Stanley Cup Championships, one with the Flames and one with the Detroit Red Wings.

He married Jane Vernon in 1994; the couple had four children: Amelia, Matthew, John and William.

He shared the William M. Jennings Trophy with Chris Osgood in 1996.

Mike Vernon Is A Member Of