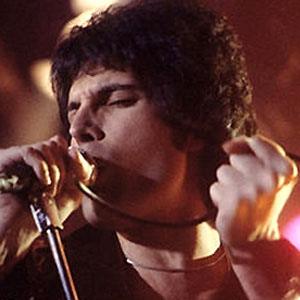 Flamboyant lead singer of the iconic rock group Queen, who was known for his remarkable vocal range. He wrote many of Queen's classic songs, such as "Bohemian Rhapsody" and "We Are the Champions."

He replayed the songs he heard on the radio when he was 12 years-old. One of his first big bands was called Ibex.

Queen's hit "We Will Rock You" was listed as one of the top 500 Greatest Songs of All Time by Rolling Stone magazine and was inducted into the Grammy Hall of Fame in 2009.

He was born Farrokh Bulsara, but would later change it to Freddie Mercury. He was in a relationship with Jim Hutton, a hairdresser, from 1985 until 1991, when Mercury died of bronchopneumonia, which was brought on by AIDS.

He was joined by guitarist Brian May in Queen. May composed the songs "Fat Bottomed Girls" and "We Will Rock You" for the band.

Freddie Mercury Is A Member Of