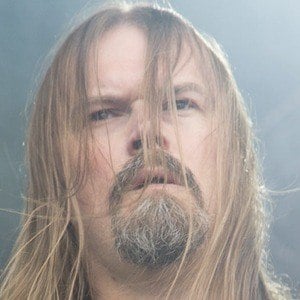 Sweden guitarist best known as the lead guitarist and backing vocalist for the acclaimed progressive metal act Meshuggah. He has also released solo music under the name Fredrik Thordendal's Special Defects, including 1997's Sol Niger Within.

He formed Meshuggah, then known as Metallien, in his hometown of Umea, Sweden in 1985.

He was named the 35th greatest heavy metal guitarist of all time by Guitar World.

His father was a big fan of jazz music.

He has performed alongside fellow guitarist Marten Hagstrom in Meshuggah.

Fredrik Thordendal Is A Member Of