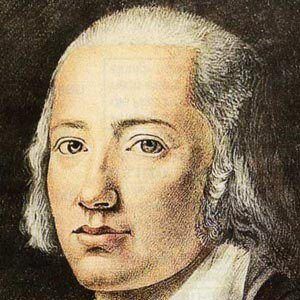 Lyric poet and novelist associated with the Romanticism and German Idealism movements. He is perhaps best known for a 1799 novel entitled Hyperion.

He was born in Wurttemberg and studied at the Tubinger Stift before deciding against a career in theology.

He suffered from a severe form of the psychiatric disorder hypochondria.

He fell in love with Susette Gontard, a married woman. Though it could never result in marriage, the relationship was so important to Holderlin that he referenced Gontard (as "Diotima") in many of his poems.

He was the theology school roommate of Georg Wilhelm Friedrich Hegel, and he influenced Hegel's philosophical ideas.

Friedrich Holderlin Is A Member Of