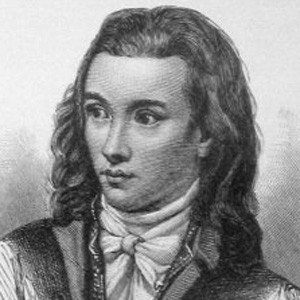 German Romantic poet, philosopher, and author who wrote under the pen name of Novalis. His literary works include Fichte Studies, Hymns to the Night / Spiritual Songs, and The Novices of Sais.

His birth name was Georg Philipp Friedrich von Hardenberg, and he was born to German nobility on an estate in the Harz mountains.

He died of tuberculosis a month shy of his twenty-ninth birthday.

He was engaged to Sophie von Kuhn, who tragically died at the age of fifteen before the couple could marry. Later, he became engaged to Julie von Charpentier.

He studied law and, during his time at university, made the acquaintance of author Johann von Goethe.

Novalis Is A Member Of