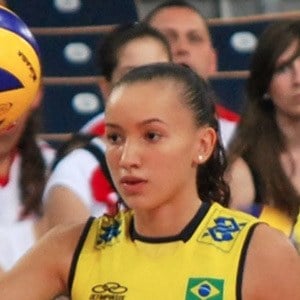 Brazilian professional indoor volleyball player who is known for her work as an outside spiker. She is known for playing on the Rexona-Ades club as well as the Brazilian national team including during their gold medal wins at the 2014 FIVB World Grand Prix in 2014 and in 2016 in Bangkok.

She first gained recognition in 2013 when she joined the Brazil national team. The year she debuted, she helped the squad win the FIVB World Grand Prix in Sapporo and the South American Championships in Ica.

She has received several individual awards for her playing including the 2018 Best Outside Spiker award at the FIVB Club World Championships and Most Valuable Player at the South American Club Championships in 2017.

She was born and raised in Belo Horizonte, Minas Gerais, Brazil.

Other players also known for their work on Brazil's national team include Tandara Caixeta and Thaisa Menezes.

Gabriela Guimarães Is A Member Of