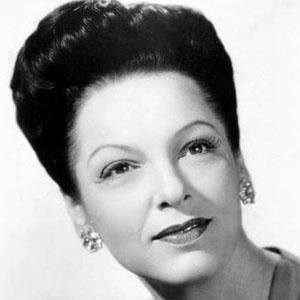 She won the Academy Award for Best Supporting Actress for her roles as sly, manipulative characters.

He debut film appearance was in the 1936 drama, Anthony Adverse, which won her an Oscar Award.

As one of the Hollywood Ten who defied McCarthy's House Un-American Activities Commission, she was blacklisted by Hollywood. Her film career ended in the early 1950s.

She was born Edith Holm Sondergaard, in Litchfield, Minnesota. Her parents were of Danish descent.

She auditioned for the part of the Wicked Witch in the Wizard of Oz, but withdrew after the producers decided to make the witch ugly. The part eventually went to Margaret Hamilton.

Gale Sondergaard Is A Member Of