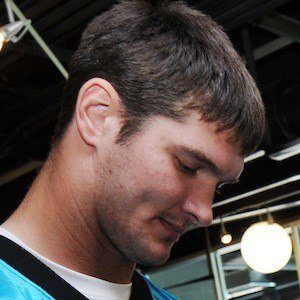 NFL tight-end who had a standout season with the Cleveland Browns in 2015, surpassing 1,000 receiving yards. He had previously spent several years within the Carolina Panthers organization.

He was selected in the fifth round of the 2008 NFL Draft after playing college football at Louisville.

His 2015 season led him to his first ever Pro Bowl selection, as well as a 3-year contract extension with the Browns.

His parents are named Tena and Brian. He once appeared on the reality show Total Divas, and on the show he went on two dates with wrester Rosa Mendes.

In his first ever Pro Bowl appearance, he was teamed up with fellow tight end Travis Kelce.

Gary Barnidge Is A Member Of