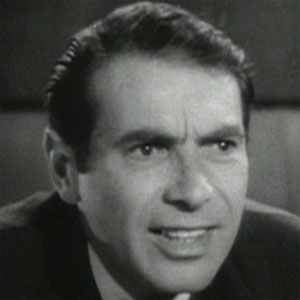 With a career that spanned close to 40 years, his credits list is vast, but his most remembered role may be for his work in the acclaimed film All About Eve.

His first film role came in 1944 for his appearance in Winged Victory. He did not have another film role in the subsequent five years.

His television career was mostly comprised of short-lived series roles, but, from 1954 to 1956, he had a major role in NBC's Justice.

He married twice. His second wife was his All About Eve co-star Bette Davis. They divorced after a ten year marriage.

He shared the screen with Michael Parks in a recurring role on Then Came Bronson.

Gary Merrill Is A Member Of

All About Eve
Born In 1915
Movie Actors
First Name Gary