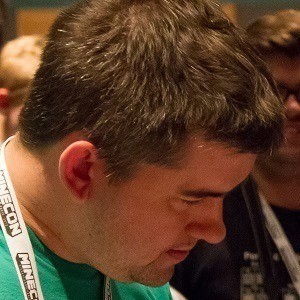 American Let's Play Minecraft commentator residing in Bulgaria who refers to himself as the Gaming Hermit. He is the founding member of the HermitCraft.

His YouTube name is derived from his college nickname of Generic Bluesman, or GB, which he earned while playing in a band called The Sun Tea Bandits. He appeared on the NBC game show Let's Make a Deal.

Born in Oklahoma City, Oklahoma, he lived in Texas, Tennessee, Florida, Massachusetts, Georgia, Pennsylvania, and Ohio before moving to Bulgaria. He married his wife on November 5, 1999.

He was invited to be a part of the MindCrack server by Guude in August of 2012.

Generikb Is A Member Of