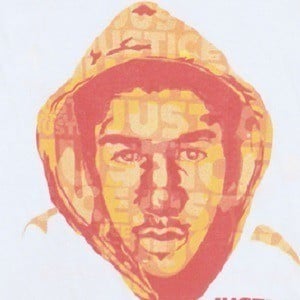 17-year-old American high school student who, while walking home from a convenience store, was shot and killed by American neighborhood watch coordinator George Zimmerman in a gated community in Sanford, Florida. Zimmerman claimed self defense and was acquitted of his second-degree murder and manslaughter charges on July 13, 2013.

He attended Carol City High School for his freshman year and much of his sophomore year before transferring to Krop High School.

Many talk show hosts, including Piers Morgan, instigated discussion and division after the incident occurred in 2012.

His parents, Tracy Martin and Sybrina Fulton, were shattered by his death.

Many people believed his trial would polarize the nation, much as Rodney King's trial did back in 1993; but even with the acquittal of his killer, things remained calm--although President Obama spoke out against the verdict.

Trayvon Martin Is A Member Of