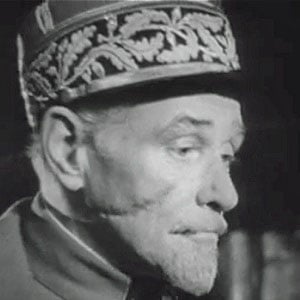 Remembered for his guest appearances in such 1950s and '60s television series as Perry Mason, Alfred Hitchcock Presents, Bonanza, and The Outer Limits, this American actor is perhaps most famous for his role as Martin Peyton on the ABC soap opera Peyton Place.

After graduating from Brown University, he appeared in the 1926 Broadway production of The Scarlet Letter. A decade and a half later, he made his on-screen debut in the 1942 movie Commandos Strike at Dawn.

He gave a critically acclaimed performance as U.S. Secretary of State Cordell Hull in the 1970 historical film Tora! Tora! Tora!

His twelve-year marriage to Elizabeth Dana Macready resulted in three children, including a son, Michael, who had a career as a screen actor. George Macready's grandson, John Macready, became an Olympic gymnast.

George Macready Is A Member Of