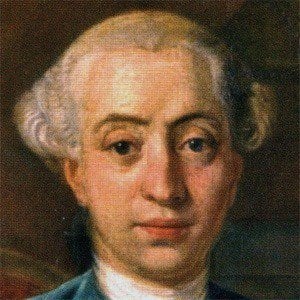 Remembered for his 3,500-page memoir, Histoire de ma vie, this eighteenth-century Italian writer and renowned womanizer was, because of the latter activity, the inspiration for the term "Casanova" (a descriptor of adventurous, unreliable men who are popular with women).

After studying law at the University of Padua and subsequently training briefly at a seminary, he was forced into an Italian debtors' prison.

Born in Venice, Italy, he was the son of actor parents Zanetta Farussi and Gaetano Giuseppe Casanova. Two of his five siblings, Francesco Giuseppe Casanova and Giovanni Battista Casanova, had successful careers as visual artists.

Giacomo Casanova Is A Member Of