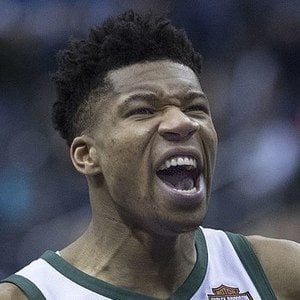 NBA star known as The Greek Freak who won back-to-back NBA MVP awards in 2019 and 2020 as a member of the Milwaukee Bucks. He led the Bucks to an NBA championship in 2021 and was named the 2021 NBA Finals MVP.

He played professionally in Greece for Filathlitikos B.C. He was selected 15th overall in the 2013 NBA Draft by the Bucks.

He made his first NBA All-Star Game appearance in 2017 and also received the NBA's Most Improved Player award in 2017. He was named the 2019-2020 NBA Defensive Player of the Year.

His parents are named Veronica and Charles. He has four brothers, Kostas, Alex, Francis and Thanasis. He has been dating volleyball player Mariah Riddlesprigger. In February 2020, they welcomed their son Liam Charles. They had a second child in early 2022.

He and his longtime teammate Khris Middleton were the Bucks' top scorers during the team's 2020-21 NBA championship run.

Giannis Antetokounmpo Is A Member Of