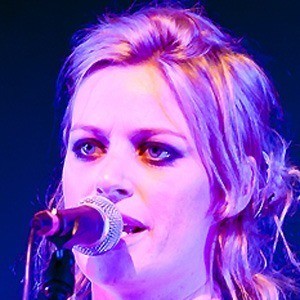 Featured singer on the Smashproof single "Brother," which stayed atop the New Zealand charts for nearly three months.

She wrote the song "Hallelujah" in memory of her father who died from cancer. It won the International Songwriting Competition in 2004.

She won the 2010 New Zealand Music Award for Best Pop album for Holy Smoke, and was nominated for Single of the Year with "Oh My."

She was born Virginia Wigmore in Aucland, New Zealand. Her sister Lucy Wilgmore played Justine Jones in the soap opera Shortland Street. She also has a brother named Olly.

Her song "Hallelujah" was featured in the closing credits of an episode of One Tree Hill, starring Bethany Joy Lenz.

Gin Wigmore Is A Member Of