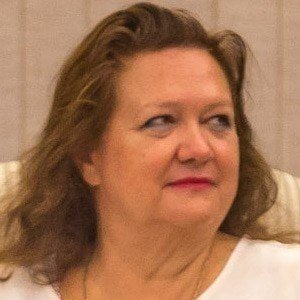 Australian iron ore mining magnate. She had an estimated fortune of over $10 billion in 2011.

She began as a rancher and mining prospector in northwest Australia and with her father, lobbied the country to repeal their ban on iron ore exports.

She kept a deliberately low-key profile, yet became somewhat of a national obsession for Australia. She was frequently the subject of speculation and media conversations.

She was married twice and had three children.

She trailed other billionaires like Carlos Slim in the amount of fortune under her control. Citigroup estimated in 2011 that she could soon overtake all of them and become the world's richest person.

Gina Rinehart Is A Member Of