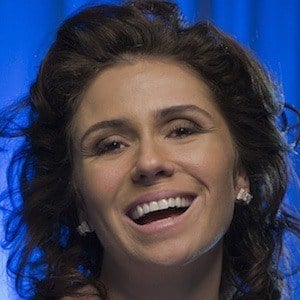 Perhaps most well known for her award-winning portrayal of Jade Rachid on the Brazilian telenovela O Clone, she is also famous for her series regular roles in Da Cor do Pecado (as Barbara); Sete Pecados (as Clarice); Tres Irmas (as Alma); and Viver a Vida (as Dora Vilela).

When she was just fourteen years old, she made her television debut on the Brazilian family game show Clube da Crianca and soon thereafter began her five-year portrayal of Isa Pasqualete on the soap opera Malhacao.

For her early-career role in the series Lacos de Familia, she won a TV Press Award and a Qualidade Award.

The children of ballerina Suelly Antonelli and opera singer Hilton Prado, she and her attorney brother, Leonard, were raised in Rio de Janeiro, Brazil. After divorcing Ricardo Medina, she had a son named Pietro with her partner Murilo Benicio and subsequently married Leonardo Nogueira, who became the father of her twin daughters Antonia and Sophia.

She appeared alongside American actress Amy Irving in the 2000 film Bossa Nova.

Giovanna Antonelli Is A Member Of