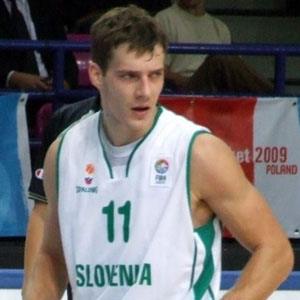 Flashy Slovenian NBA point guard who entered the NBA with the Phoenix Suns in 2008. He spent the 2011-12 season with the Houston Rocketts before re-joining the Suns in 2012 and he was named the NBA's Most Improved Player in 2014. He was then traded from the Suns to the Miami Heat just before the 2014-15 NBA trade deadline.

He began playing professional basketball in Europe at the age of 17 for Ilirija Ljubljana in Slovenia.

He grew up playing soccer, but an injury forced him to switch sports.

He married Maja Dragic in 2013 and he has a son named Mateo. His younger brother Zoran also became an NBA guard.

Goran Dragic Is A Member Of