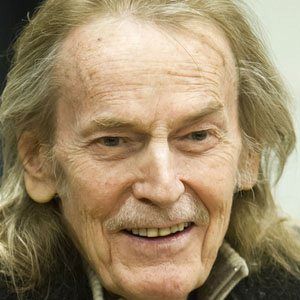 Canadian singer-songwriter who recorded "If You Could Read My Mind." He has won sixteen Juno Awards, among other honors.

He appeared on Orillia radio when he was a young soprano. He wrote the "Canadian Railroad Trilogy" for the CBC.

He was inducted into the Canadian Music Hall of Fame in 1986.

He married his wife Brita in April 1963; after their divorce in 1973, he remarried Elizabeth Moon in 1988. He has three sons, Eric, Miles and Fred, and two daughters, Meredith and Ingrid.

Some of his songs were recorded by Elvis Presley.

Gordon Lightfoot Is A Member Of