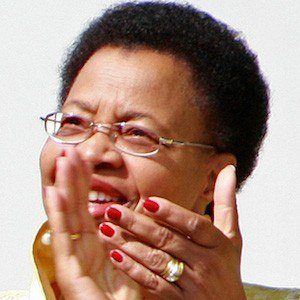 Mozambican politician and humanitarian who was First Lady of Mozambique from 1975 to 1986 and First Lady of South Africa from 1998 to 1999. As of 2014, she is the only woman to ever be the first lady of two different nations.

She attended the University of Lisbon in Portugal and returned to Mozambique to join the Mozambican Liberation Front.

She received the 1995 Nansen Medal from the United Nations for her work benefiting refugee children.

She has been a member of The Elders under the leadership of Kofi Annan.

Graca Machel Is A Member Of