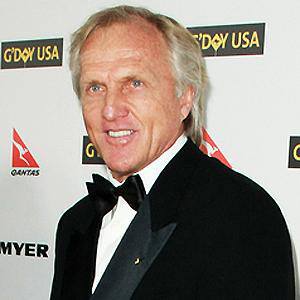 Championship golfer who was nicknamed The Great White Shark. He was the world's #1 ranked golfer for 331 weeks during a career that began in 1976 and spanned over three decades. He won the Open Championship in 1986 and 1993 and was inducted into the World Golf Hall of Fame in 2001.

He played rugby and cricket growing up and also excelled as a surfer.

He had two children with his wife Laura, whom he divorced in 2007. He then married Kirsten Kutner in 2010. He was also married to tennis star Chris Evert for a year.

He was defeated by Fuzzy Zoeller in an 18-hole playoff at the 1984 US Open.

Greg Norman Is A Member Of