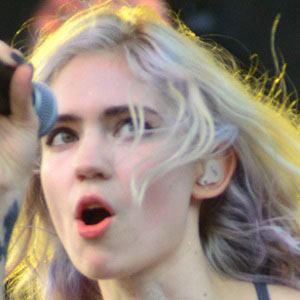 Electronic dark wave and synthpop artist whose 2012 album Visions won the 2013 JUNO Award for Electronic Album of the Year. She earned additional praise for her 2015 album Art Angels and her 2020 album Miss Anthropocene.

She attended McGill University in Montreal where she studied Russian literature and neuroscience.

She wrote the song "Oblivion," which became an indie sensation and was ranked #1 on Pitchfork's Top Tracks in 2012.

Her real name is Claire Elise Boucher. She has a stepbrother who raps under the name Jay Worthy. Her stepbrother, Mac Boucher, helped produce some of her music videos. She began a relationship with Elon Musk in 2018. She and Musk welcomed a son named X Æ A-12 in 2020.

She featured Janelle Monae on her 2015 track "Venus Fly."

Grimes Is A Member Of