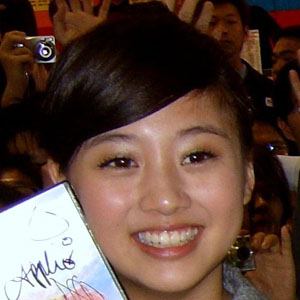 Known best for her work with the Taiwanese vocal group Hey Girl, this Mandopop singer contributed to such popular singles as "Call Big Sister" and "I Want to Love Well." Also an actress, she appeared in such films and television series as, respectively, The Four and Brown Sugar Macchiato.

At the age of seventeen, she became a founding member of an all-female, Taiwanese vocal ensemble called Hei She Hui Mei Mei (the band was later renamed Hey Girl).

She and her Hey Girl bandmates often performed with a popular boy band called Lollipop F.

Born Wu Ying-Jie and also known by the anglicized name of Emma Wu, she grew up in Taiwan.

She and fellow Taiwanese singer Aaron Yan (known for his work with the boy band Fahrenheit) co-starred in a 2008 television series titled Mysterious Incredible Terminator.

Gui Gui Is A Member Of