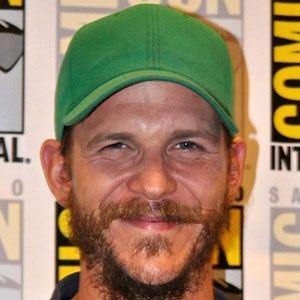 Screen actor known for his roles in such Swedish and Norwegian films as The Color of Milk, The Invisible, Evil, and Kon-Tiki. Beginning in 2013, he also appeared in a historical television series called Vikings.

Early in his career, he appeared in the acclaimed 1989 thriller Codename Coq Rouge.

He appeared in five episodes of the Swedish television series Cleo.

His father is actor Stellan Skarsgard. His brother Alexander Skarsgard became known for his role on the popular True Blood series. He also has brothers named Bill, Valter, Sam, Ossian, and Kolbjorn, as well as a sister named Eija. He was married to actress Hanna Alstrom from 1999 until 2005.

He co-stars with Travis Fimmel on Vikings.

Gustaf Skarsgård Is A Member Of