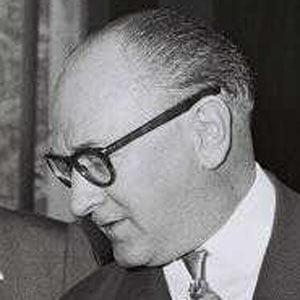 French Prime Minister who held office in the mid-1950s. A member of the French Socialist Party, he also led the Workers' International Party's French Section from 1946 to 1969.

He began his career as a schoolteacher and subsequently served in the World War II-era French Resistance. He was a German prisoner-of-war for seven months in 1939.

He participated in the negotiation and signing of the 1957 Treaty of Rome that created the European Economic Community.

He grew up in Normandy, France as the child of a worker in the textile industry.

He left the government shortly after President Charles de Gaulle took power in 1959.

Guy Mollet Is A Member Of