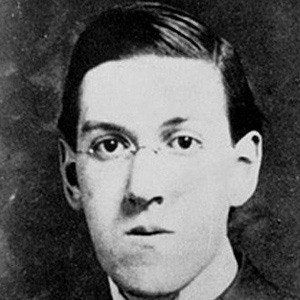 American author of horror, fantasy, and Gothic fiction whose most famous works include The Call of Cthulhu, The Shadow Out of Time, and At the Mountains of Madness. Though he died in poverty, having only published his works in pulp magazines, he gained posthumous fame as a writer of horror fiction.

He was a literary prodigy who was able to recite poems by age three and write complete poems by age six. He suffered throughout his childhood from night terrors; these early experiences deeply affected his literary work.

He coined the term cosmicism (or, cosmic horror), and he was an inspiration to later horror writer, Stephen King.

He was born in Rhode Island to jewelry salesman Winfield Scott Lovecraft and Sarah Phillips Lovecraft. He was briefly married to Sonia Greene during the mid-1920s.

HP Lovecraft Is A Member Of