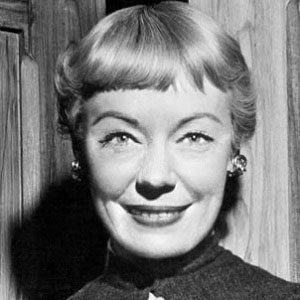 Perhaps best remembered for her nearly two-decade portrayal of Pauline Rysdale on the CBS soap opera The Secret Storm, she is also known for her work as a theater producer and actress.

She spent the first eight years of her life in Great Falls, Montana, and the remainder of her childhood in Los Angeles, California. After receiving a bachelor's degree in speech from the University of Southern California, she performed in the San Francisco and Los Angeles productions of Stephen Sondheim's Merrily We Roll Along.

Her Bonard Productions company helmed Broadway productions of the Tony-winning musical A Thurber Carnival and the Drama Desk Award-winning play Catholic School Girls. A playwright as well as an actress and producer, she penned both the 1969 play A Round With Ring and the 1979 drama Zellerman, Arthur.

Her first marriage to Jack Kirkland produced two children before ending in divorce in the late 1940s. She subsequently married Harold Bromley, who became the father of her third child, followed by Whitfield Connor, to whom she was married from 1956 until Connor's death in the late 1980s.

She and Elaine Stritch both understudied the role of Martha in the first Broadway production of Edward Albee's famous play Who's Afraid of Virginia Woolf.

Haila Stoddard Is A Member Of