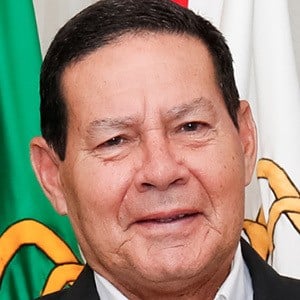 He first joined the army in February of 1972. He became an officer in December of 1975 and attended the Escola de Comando e Estado-Maior do Exercito where he graduated as a Staff Officer. He entered politics in 2015 when he was appointed to the Secretary of Economy and Finance in the Federal District.

He has earned several decorations for his military service including the distinctions of Order of Military Merit to the Grand Cross Degree, the Peacemaker Medal, and the United Nations Medal.

He was born and raised in Porto Alegre, Rio Grande do Sul, Brazil. He married Paula Mourao, first lieutenant of the Brazilian Army, in October 2018.

He served as Vice President to right-wing President Jair Bolsonaro during his 2019 term.

Hamilton Mourão Is A Member Of