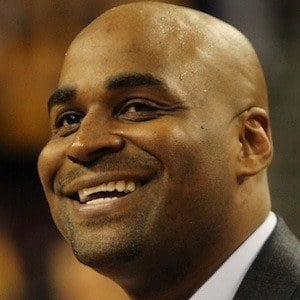 Retired NBA guard who was best known for winning the 1993 and 1995 NBA Slam Dunk Contests. His dunking ability earned him the nickname "Baby Jordan," in reference to all-time legend Michael Jordan.

He attended the University of Southern California, where he became one of the best players in program history and was named a consensus All-American as a junior.

He left college after his junior year and was taken 12th overall by the Miami Heat in the 1992 NBA Draft. He retired in 1996 after appearing in only 200 NBA contests, averaging nine points per game.

He married Pamela Miner and has two children. His jersey was retired by his alma mater in 2012.

Harold Miner Is A Member Of