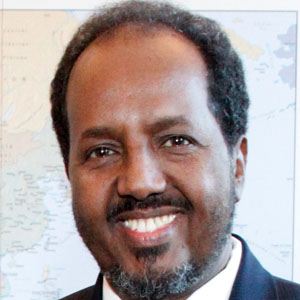 President of Somalia who was elected in 2012, which marked the end of the civil war. He has worked to end corruption and promote socio-economic development in his country.

He was a university professor and turned consultant to various international non-governmental organizations after civil war broke out in his country.

He made the country's security a number one priority, and as if to underscore that point while he was giving that speech to assembled dignitaries in the Somalian capital, the building was attacked by gunmen.

He was born in Jalalaqsi, Trust Territory of Somalia.

In 2013 he met with US Secretary of State Hillary Clinton, formally re-establishing diplomatic ties between the two countries.

Hassan Sheik Mohamud Is A Member Of