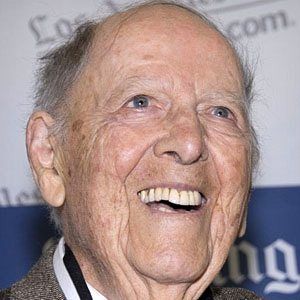 Pulitzer Prize-winning author of War and Remembrance, The Caine Mutiny, and other historical novels. He is also known for plays such as Nature's Way and The Traitor. His novel, Aurora Dawn, was a Book of the Month Club selection in 1947.

He graduated from Columbia University in 1934. During the World War II Years, he joined the U.S. Navy and served in the Pacific.

His 1978 work, War and Remembrance, provides an unflinching account of the Holocaust and was made into a popular miniseries.

He was born in New York City to Jewish-Russian immigrant parents. He married Sarah Brown in 1945; the couple had three sons.

Henry Kissinger praised his work for its realistic portrayal of war.

Herman Wouk Is A Member Of