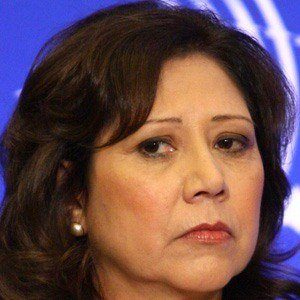 Politician who became the first Hispanic woman to serve in the U.S. Cabinet when she was nominated as the 25th U.S. Secretary of Labor in 2009. She also served in the US House of Representatives, representing California's 31st and 32nd districts, from 2001 to 2009.

She attended California State Polytechnic University in Pomona and earned a B.A. in Political Science before studying at USC for her MPA.

She was the first female recipient of the John F. Kennedy Profile in Courage Award in 2000 and she has been very active on labor causes and environmental work.

She was nominated to be the Secretary of Labor by Barack Obama.

Hilda Solis Is A Member Of