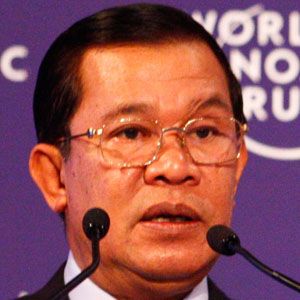 Cambodian politician and dictator who became Prime Minister of Cambodia in 1985. His administration has been accused of tampering with election results and widespread corruption.

He served in the Cambodian military and played a role in the Vietnam occupation and overthrow of the Khmer Rouge regime in Cambodia.

He married Bun Rany in 1976 and had six children with her.

He and Rajiv Gandhi of India have both served as Prime Ministers of their countries.

Hun Sen Is A Member Of