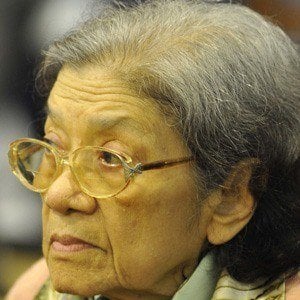 Gained fame as the wife of aKhmer Rouge co-founder, Ieng Sary, who was minister of foreign affairs of Democratic Kampuchea's Khmer Rouge regime. She and her husband were arrested on suspicion of genocide and crimes against humanity in 2007.

She studied at the Sorbonne in France and became the first Cambodian to earn a degree in English literature.

She was declared unfit to stand trial due to her Alzheimer's disease.

She, her sister Khieu Ponnary, her brother in-law Pol Pot and, her husband were known as Cambodia's Gang of Four.

Ieng Thirith Is A Member Of