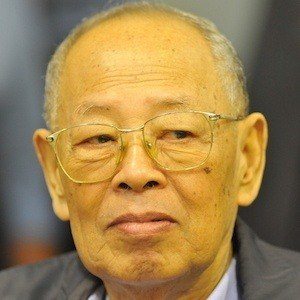 Most Popular#179257
Politician Born in Vietnam#3

Co-founder of the Khmer Rouge, the Communist Party of Kampuchea, in Cambodia who, in 2007, was arrested for crimes against humanity. He was charged with genocide in 2009 but died before the case against him could be brought to a verdict.

He studied in Paris and stated in the Latin Quarter which, at the time, was the center for student radicalism.

He was the brother-in-law of Pol Pot.

Most Popular#179257
Politician Born in Vietnam#3

Ieng Sary Is A Member Of