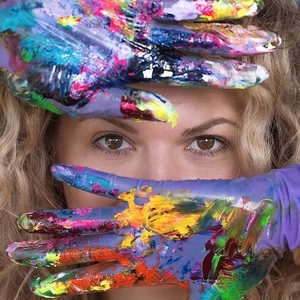 Painter who is known for her works in oil as well as her unique application technique of finger painting. Her works have been featured in several press outlets and galleries and have been collected by companies such as Microsoft, Coca-Cola and several Swedish Medical Centers.

She learned multiple painting techniques from Universities including charcoal, pastels, watercolors, and oil. While studying abroad in Taiwan, she had a lack of brushes and decided to finish her large scale painting by hand. The application, technique, and finished product inspired her to continue in the style, developing her own signature technique and style.

Her works have been featured in several different press outlets including Forbes, Barron's, Business Insider, and CBS New York.

She was born and raised in Seattle, Washington. Her mother taught piano lessons and her dad was a carpenter, both leading to her aspirations in art.

Her instructional videos have been compared to the Bob Ross show, The Joy of Painting.

Iris Scott Is A Member Of