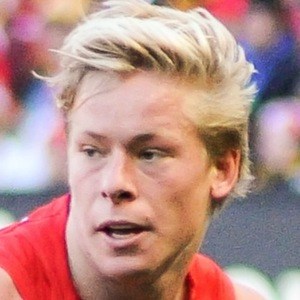 Australian rules midfielder and forward who was selected second overall in 2014 by Melbourne, but was then controversially taken from them by the Sydney Swans, who had the 18th overall pick. This led to a tweaking in the AFL draft rules.

He grew up playing for Cardiff Hawks before joining Sydney's youth side when he was 12 years old. He also played soccer, cricket, and rugby before settling on football.

His play during the 2015 AFL season, his rookie year, earned him an AFL Rising Star nomination.

He grew up in New South Wales, Australia.

He and Kieren Jack have played together on Sydney.

Isaac Heeney Is A Member Of