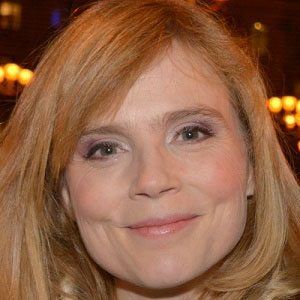 Perhaps most well known for her Cesar Award-winning work in the 2001 film Se Souvenir des Belles Choses, she is also notable for her acclaimed performances in Anna M. (2007), Les Sentiments (2003), Entre Ses Mains (2005) and a number of other French films.

She made her screen acting debut in the 1992 feature Beau Fixe, earning a Cesar Award nomination for her portrayal of Valerie.

She received Moliere Awards for her performances in theatrical productions of Mademoiselle Else (1999) and L'Hiver sous la Table (2004).

Following a six-year relationship with actor and director Clement Sibony, she married movie producer Bruno Pesery and subsequently welcomed a son named Antoine. She is the sister of French pop singer Benoit Carre (of the group Lilicub).

She and Roxane Duran were both cast in major roles in the 2014 French film Respire.

Isabelle Carre Is A Member Of