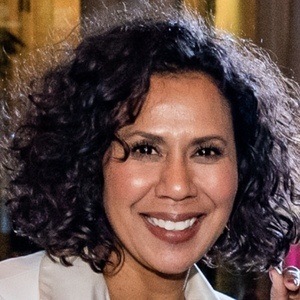 Canadian radio personality who rose to widespread acclaim for hosting the CBC Montreal show Seat at the Table, beginning in 2017. She was named the 2017 Dyanstie Gala's radio personality of the year award in February 2018 for her work on the show.

She first started her career in entertainment as a researcher for MusiquePlus in 1997. She became an on-air personality upon debuting on the pop culture series Flash.

She hosted the widely popular Deux Filles Le Matin radio series between 2000-2012. She was named the SOBA female personality of the year in 2009 and 2010.

She is of Haitian and French Canadian descent. She was later adopted, and grew up with three brothers.

She interviewed a litany of celebrities during her time as host of Flash, including Gerard Depardieu, Tom Cruise, and Jeanne Moreau.

Isabelle Racicot Is A Member Of