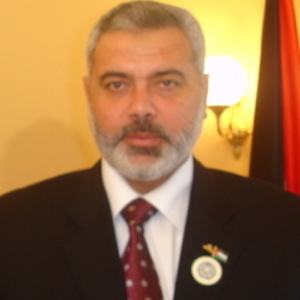 Senior political leader of the Hamas group and one of two disputed Prime Ministers of the Palestinian National Authority. Despite being dismissed as Prime Minister in 2007 he has continued to have prime ministerial authority in the Gaza Strip.

He graduated from the Islamic University of Gaza with a degree in Arabic Literature.

He was elected Prime Minister in 2006 and his office has been under dispute since 2007.

His parents were refugees of the Palestinian-Israeli War of 1948. He has 13 children.

President Mahmoud Abbas attempted to dismiss him in 2007, but he continued to serve as prime minister until 2014.

Ismail Haniyeh Is A Member Of