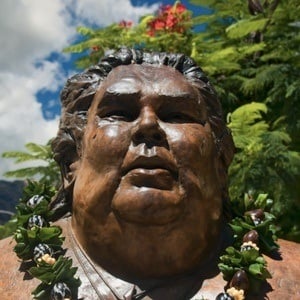 Hawaiian musician and entertainer who became an international star in 1993, dying of heart problems just four years later. He is best known for his medley of "Somewhere Over the Rainbow/What a Wonderful World."

He began playing music with older brother and cousin at the age of eleven and continued after both his partners went their separate ways.

His medley of "Somewhere Over the Rainbow" and "What a Wonderful World" reached #12 on the Billboard charts and was used on the TV series Glee, Scrubs, ER, and Life on Mars. It has also been featured in several feature films.

The popular Hawaiian musician and actor Moe Keale was his uncle.

His music was used in the film Meet Joe Black, which starred Brad Pitt.

Israel Kamakawiwoʻole Is A Member Of