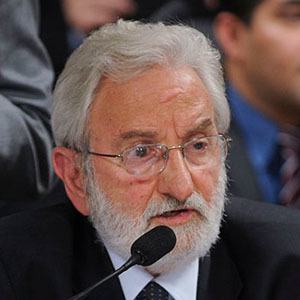 Brazilian politician and engineer who is known for having been a Federal Deputy for Sao Paulo. He is a member of the Socialism and Liberty Party and is also the party leader at the Chamber of Deputies.

He started his career in politics during the student movement against Brazil's military regime. He served as the director of the Academic Center at the School of Engineering in Maua. He was first elected to congress in 2002 as part of the State of Sao Paulo.

He is also an author and has written several books on education and politics including Forest Code, Imposed Municipalization and Social Exclusion, and Coherence and Resistance.

He is the son of Leonardo Valente and is married with two children of his own.

He filed a lawsuit against the SBT network and its anchor Rachel Sheherazade in 2014 for their comments about indirectly inciting torture and violence.

Ivan Valente Is A Member Of