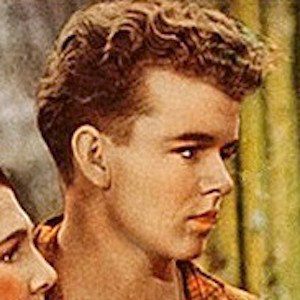 Teen actor who is perhaps best known for his portrayal of the famed character Huckleberry Finn in the David O. Selznick production of The Adventures of Tom Sawyer.

His portrayal of Huckleberry Finn was his first big break three years after he first screen tested in 1935. He had a fine voice which also garnered him attention.

He retired from acting at the young age of 23, finishing his career by performing in teen musical comedies.

He was born in Mattoon, Illinois and died in Greenfield, Massachusetts after battling lung cancer.

He had a small role in the film epic Since You Went Away, which starred Shirley Temple.

Jackie Moran Is A Member Of