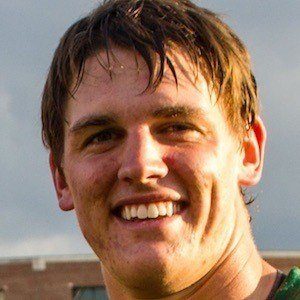 Quarterback who led the Alabama Crimson Tide to a National Championship with a 45-40 win over the previously undefeated Clemson Tigers on January 11, 2016.

He was a basketball and football player at St. Paul's Episcopal School. He committed to play for the Florida State Seminoles in 2010 and was redshirted as a freshman that year as a backup to EJ Manuel.

He again lost the starting job at Florida State as a redshirt sophomore to eventual National Champion and Heisman winner Jameis Winston. He transferred to Alabama in January of 2014 after graduating from FSU.

He was born in Mobile, Alabama.

He beat out Blake Sims to start for Alabama in the 2015 college football season.

Jake Coker Is A Member Of